Login to My CAS Community 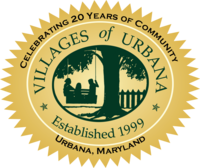 The house has existed at least since 1747, and was once the heart of a 1,000-acre farm. It remains today as a reminder of the area's history. In honor of that history, the Villages of Urbana is planning several important initiatives:

Congratulations to Rani Rusnock, the winner of the VOU Fat Oxen House Art Contest. Her beautiful water color evoked the history of the farmhouse when it was the centerpiece of a productive farm. 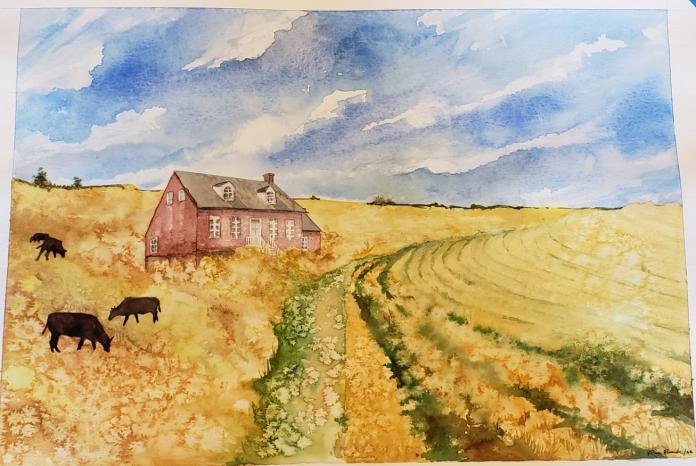 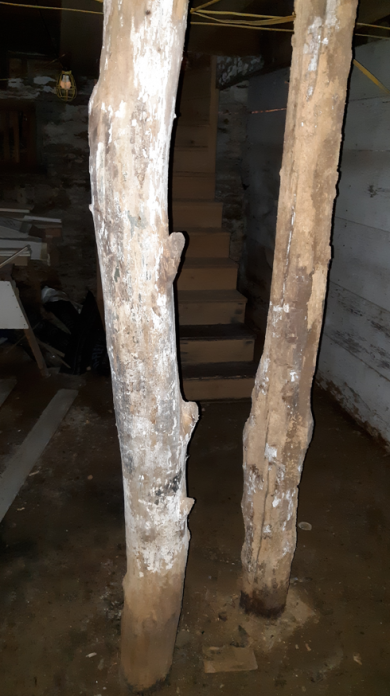 During 2022, efforts are being made to stabilize the foundation of the structure and to replace some rotting windows and doors. This photo shows some of the trees/timbers used to support the structure right now!

Fat Oxen History and Background -
What's in a Name?


Naming this plot “Fat Oxen” was an expression of hope for a prosperous future and productive farm enterprise. Oxen were necessary and prized as work animals. If your hard-working oxen were healthy and fat, that was a sign of prosperity. This farm did not raise oxen for sale, but used them for labor in an age before tractors and other machinery. Oxen were used for heavy hauling and plowing.

It’s the handsome house with the very peculiar name. It is one of the oldest houses in all of Frederick County, and the first substantial home built in the Urbana region. From high on a hill, it has looked south to Sugarloaf Mountain since the mid-1700s.

It is “Fat Oxen,” and it was once the center of a 1,000-acre plantation created by the prominent Beall family, whose Scottish forebears immigrated to the English colony of Maryland in the late 1600s. Now this restored house is a focal point of one of Maryland’s newest communities, the Villages of Urbana.
“Fat Oxen” has fallen into disrepair in recent decades, through the neglect of owners and tenants, and it was finally abandoned as a residence in the early 1990s.

When Monocacy Land Company and Natelli Communities began planning the Villages of Urbana a few years later, one of the first things they did was board up the windows and doors of this dilapidated but priceless and secure it behind high locked fencing to prevent further deterioration and vandalism.
[In 2003], resourceful craftsmen – masons, carpenters, roofers and painters – have taken painstaking efforts to put this wonderful house back in its original structural condition. Next will come the gradual renovation of Fat Oxen’s distinctive interiors, featuring early mantels, wide-plan flooring and massive corner fireplaces.

The Bealls of Maryland
The Beall family (pronounced “Bell” in Maryland) first settled in the tidewater region of southern Maryland, in what is now Prince George’s and Charles counties… In 1712, a Swiss explorer named Louis Michel hiked up Sugarloaf Mountain and made maps of the surrounding region. The first [European] settlers arrived in the 1730s and 1740s – Germans coming south from Pennsylvania and English families migrating northwest from the Chesapeake region of Maryland.

The first Beall settler, Nathaniel, and his wife Ann Murdoch Beall, built a log cabin in the early 1740s, where their son Elisha Beall was born in 1745, one of the first children of English descent born in the newly created Frederick County. The cabin probably stood on the site of today’s Boxwood Lodge, a handsome fieldstone house built by Elisha’s family in 1810. Restored today, it is visible on the east side of Route 355, overlooking a lovely pond next to the Villages of Urbana’s north entrance. The Bealls would later manufacture bricks at a brickyard in old Urbana village during the 19th century.
No one knows for certain when Fat Oxen was built. William Beall, Sr. acquired a land patent of that name in 1746, and the house was likely built sometime between then and 1779, when a deed of sale to Charles Beall referred to “a dwelling plantation” on the estate. Houses of this architectural style, today called Georgian vernacular – symmetrical, one and a half stories of red brick laid in Flemish bond – were built throughout the mid-1700s in the Chesapeake region, but it was a rarity at that time in western Maryland. In this region, stone houses built by Pennsylvania-German immigrants (like Frederick City’s “Schifferstadt”, circa 1756) were the norm.

Fat Oxen remained in the Beall family until sold in 1800 to Capt. Thomas Sprigg, a descendant of another influential English colonial family from Prince George’s County. Sprigg’s heirs offered the farm for public auction in 1826, when it comprised 835 acres spanning both sides of “the public road from Georgetown” (today’s Route 355). The farm included, according to an ad in the Frederick-Town Herald “a Brick Mansion House, convenient and extensive.” The soil of the farm was described as “admirably adapted to the growth of fine Yellow Tobacco, so eagerly demanded by the foreign market”, and its per-acre grain yields were “scarcely surpassed at the last harvest by any farm in the county.”

The illustrious McPherson family
The buyer of Fat Oxen at that auction was one of the most powerful men in Maryland during the Federal period, John McPherson, Sr. A native of Pennsylvania, he had come to Frederick four decades earlier, when as a young lieutenant in the American Revolutionary army in 1781, he was put in charge of procuring rations to feed British prisoners held in Frederick. After the Revolution, he achieved great success in business and politics. As owner of the Catoctin Furnace (the ruins of which are still visible next to Route 15 in Thurmont), McPherson was one of the largest iron producers in the new Republic.

Fat Oxen was inherited by McPherson’s son, John Jr., who was a bank manager in Frederick, operator of the Catoctin Furnace and founder in 1830 of the Araby Mills flour company (today the site of the Monocacy Battlefield Visitors Center, on Route 355 north of Urbana). He was also an investor in the National Turnpike from Baltimore westward, today’s Route 40.

When built in the mid-18th century, Fat Oxen was virtually alone in the Sugarloaf region of southern Frederick County. But by 1830 the area was bustling with industry and commerce. Local landowners created a new subdivision of lots along the Frederick-Georgetown Road and dubbed it “Urbana” – in the wishful thinking, perhaps that it would become a major population center, something that would not come to pass for another 170 years!
…
Now Fat Oxen is once again a landmark of distinction – no longer the center of a great estate, but the heart of the VOU recreation complex, next to a new clubhouse designed to resemble the stone barns once so common in Frederick County.

Fat Oxen is restored to look very much as it did in the early 1800s, when two dormer windows, probably not original to the 18th century house, were added to the front roof and a small brick extension was built on the back of the original central section.

The renovation has restored the symmetry of the front elevation, by returning an extra front doorway back into the window it originally was, A Victorian-era front porch is now gone, and many coats of modern white paint have been carefully removed, revealing the fine Flemish-bond brickwork beneath. And the original kitchen wing, with a roofline modified in the 19th and early 20th centuries, has been restored to its authentic profile.

Today, Fat Oxen sits proudly at the top of Sprigg Street, a reminder of a time 250 years ago, when Frederick County was a wild frontier just being settled by adventurous pioneers from southern Maryland.

Why Fat Oxen?
You’ve probably been wondering how the estate came to be called Fat Oxen in the first place. It’s not known who hung this inelegant name on the original land grant, but the in 17th and 18th century, the phrase was used frequently to symbolize good fortune and prosperity. After all, the cattle (oxen) of a poor farmer – who owned a meager pasture and couldn’t afford to buy hay – would be scrawny, not fat. And even a rich man’s oxen would become thin and bony during drought. So naming an estate Fat Oxen was a wish for good luck, good weather, and wealth.

Fat oxen were often mentioned in the Bible – and in lists of dowry goods and real estate ads for farms. Dr. Samuel Johnson, the 18th century London literary figure, once made a quip that a man “who drives fat oxen will himself be fat” – an apparent parody of a famous aphorism of political liberalism, “He who rules over free men shall himself be free” (Brooke, 1739).